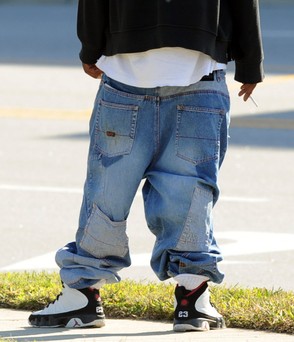 Am I missing something? I used to think that pants were to be worn to cover one’s cheeks not to prop them up. Recently we instituted a “If it’s on the Jersey Shore we don’t want it through the door” dress policy at the bar.  I rather not see someone else’s underwear or cheeks; T.M.I. for me.  In considering all our patrons we try to keep out all “offensive attire” and individuals not appropriate to our venue. Increasingly, we are seeing the fashion statement drag its saggy rear into the bar.  It almost always comes with a tough attitude and disrespect of all our house rules.

Am I missing something or do clothes no longer make the man?.  This “sagging” style, has its influences in prison mythology as a indicator of one’s sexual availability.  Do the individuals walking around looking like they lost their belts know this history? Does lowering the waste line also lead to lowering ones sensibility towards proper social behaviour.  In too many examples I have witnessed this is the case. The fashionista police are “cracking” down on this policy.  Many universities and colleges in the US are not allowing this look on campus. McDonald’s are not allowing patrons in their restaurants with such attire.  I applaud these moves.  Time to pull up our collective belts and make sure that decorum and proper dress replaces the unclothed rabble that feel their half covered selves are deserving respect for having a bad attitude they are willing to demonstrate.

Generally, I try hard not to judge a book by it’s cover but when it’s jacket is off the title screams at me.  Several times a week I am confronted by individuals who want to disregard our posted policy because they think it is unfair.  Rules are rules I always say.  In the same way that we do not allow smoking indoors we no longer wish to be exposed to exposed individuals. Those that have respect quickly pull up their pants, while those who think they are king of the hill and top of the heap usually begin their defiant stand to which I never submit.

Some would think my stand as too old school and perhaps too judgemental but I have no issue with fashion just with attitude.  I give respect and expect respect.  Those that cannot respect rules do not deserve my hospitality.