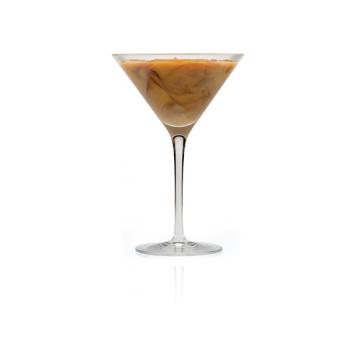 Many years ago, in a bar, far, far away an elderly lady taught me everything I needed to know about being a mixologist. It was a slow, Sunday afternoon in the middle of a hot July. I had barely opened the bar – which was in the basement of a building – when I heard a voice at the top of the stairwell calling for assistance.

I walked over to the bottom of the stairs and was surprised to see an elderly lady with a walker at the top of the landing. She wanted to come down and asked for my assistance in doing so. Of course, I obliged and helped the grand lady down the twenty odd steps; one step at a time her fragile fingers grasping my arm and making each tentative step.

She chose a bar stool, over the comfortable captain’s chair and sat smack dab in the middle of my bar her head barely above the counter top. I made the usual small talk and talked about the weather but this lady had other plans. She ordered a Brandy Alexander, with an extra shot of brandy poured on the rocks and told me to be prompt as she did not have a lot of time.

This is a three ounce drink for a woman I guessed to be in her early nineties. My bartender logic was disarmed and my respect for my elders kicked in.  I poured the grand dame a nice Brandy Alexander in a snifter and served it to her on the classist of beer coasters.

She took one sip, and then a second and smacked her lips.

“You know, my husband and I used to drink these every time we visited New York.”

“I have never been to New York I chimed.

“You must go.  The Waldorf Astoria is brilliant.  My husband and I had cocktails with Cary Grant once there. That was about 1942. In 1952 I think we saw four shows on Broadway.  Coney Island had the best rides. I remember rides in Central Park. What an amazing city”

She talked on for what seemed like hours about her fifty year marriage. Trips to New York, and Los Angeles, Hawaii and Fiji, Japan for the Olympics, and so many other places. She talked about the cottage up on Manitoulin Island when she was a little girl and described how her family would take a boat in the summer and a horse drawn sleigh in the winter. She talked of her children, the doctor, the lawyer and the dentist and how the oldest grandchild was now a father himself.

I was awed by her stories and recollections. Her husband she informed me had been in the government as a diplomat and they travelled far and wide to promote Canadian interests.

The drink disappeared and she eased herself off the barstool much spryer than she had been before. She reached in her pocket book to pay and I offered her the drink on the house in exchange for having entertained and educated me.

I asked her what she was doing for the rest of the day and she floored me with her response.

“My husband died recently. The kids think I need twenty four hour care and so they have me in a home down the street. They are coming to visit at four today and I needed this drink in order to be able to handle them. They forget that I raised them and I still speak my mind.  I’m old, I’m not useless.  Just remember, you. We all get old. That does not make us useless.”

She refused my help up the stairs and climbed them as well as I could with the help of her cane. I followed after her and watched as she walked down the street tall and proud. I had learned a lot from this little old woman. Wisdom comes from age and experience and everyone you listen to you can learn from.

BRANDY ALEXANDER (recipe made for the 21st century)

Blend the nutella and milk and then pour ingredients over ice in a snifter or martini glass.